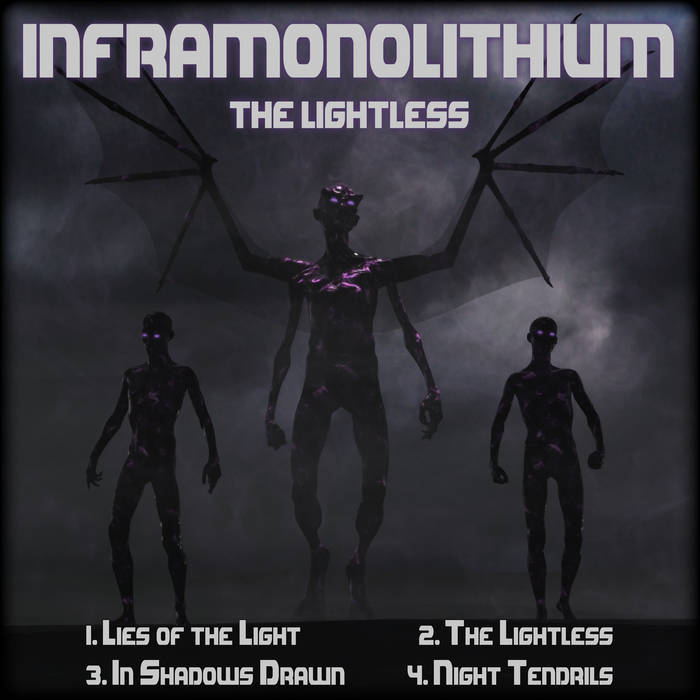 With its 3rd album, Inframonolithium wades into the world of shifting shadows between light and dark.
Inframonolithium exposes a god of lies, a spreader of false realities. All it sees and touches is turned to gold so it can seduce people into a life of make belief and false wealth.
In the shadow realm, hordes are encountered that are slowly getting pulled into the light, even though they know nothing tangible is offered in return for what they give up. An illusion of freedom awaits them,
as they become blind slaves to a society that cares only to wring everything of value out of them before it casts them away.
Even so there are those who in their blindness claim to see. Their lies, shouted from gold towers, spread like disease. They are the lightless, corrupted by the god of lies, demons in disguise.
The call of the shadow can still be heard. One can still turn away and face the truth, the one certainty. The always waiting, inevitable darkness lies at the end of every path.
A life of lies and emptiness or one of freedom. False gifts of gold or cold truth. Slavery or control over one's destiny.

Dive into the shadows with Inframonolithium. Four tracks make up 'The Lightless'. Raw uncompromising funeral doom from Belgium.

Black, gleaming monoliths rose up from the earth, and became centers of spreading gloom and decay. Inframonolithium is a cold journey into the realms of the hollow, shrieking nothing. Surges of darkness wash into the mind, wave after wave, until there's nothing left to resist the pull towards those monoliths, those portals into the void. The Inframonolithium event has begun. ... more

Bandcamp Daily  your guide to the world of Bandcamp